Within the last few years the art of Hugh Douglas Hamilton has begun to attract attention in the London sales-rooms, and his little pastel portraits, facile in art and harmonious in colour, so popular in his lifetime, are now again sought for. Of the artist himself few details, either of his life or works, have been hitherto recorded; the published biographical notices of him are meagre, even the dates of his birth and death are incorrectly given.

Hugh Douglas Hamilton was born in 1739, the son of a peruke-maker in Crow Street, Dublin. In 1750 he was placed by the Dublin Society under the tuition of Robert West in his drawing school in George’s Lane, where his industry was rewarded with several prizes. In a competition for pattern-designing in 1756, he produced the best drawing, but the prize was withheld owing to his being just over sixteen years of age; he was, however, given o bounty of four pounds. Soon afterwards he commenced a career as a portrait painter in crayons. His little portraits, being faithful likenesses, full of expression and charm, quickly done and cheap, became the vogue, and the artist soon obtained a considerable practice. These portraits are ovals about 9.5 by 7.5 inches in size, slightly executed in black and white chalk and finished with coloured chalks.

After some years of successful practice in Dublin, Hamilton was tempted to try his fortune in London. He arrived there in 1764. In that year he was awarded a prize by the Society of Arts for a chiaroscuro of Priam and Hercules lamenting over the corpse of Hector. In 1765 he won a prize of 60 guineas for an oil painting Boadicea and her daughters in distress. Though all these works were in oil Hamilton continued his work in pastel, and his portraits became as famous in London as they had been in Dublin. in 1770 he established himself in Pall Mall, at the house of a Mr Ireland, an apothecary, part of which was occupied by a fashionable milliner. Of her, he did a portrait that was hung up in her room and was so much admired by her customers that the artist soon found himself overwhelmed with business

He remained in Pall Mall two years, and then took a house in St. Martin’s Lane and built in the rear a large and commodious painting room. In this house, he lived for five years, fully occupied in a fashionable and successful practice, and exhibiting with the Society of Artists. In 1778 Hamilton went to Italy and settled in Rome, visiting also Florence where he stayed for some time. He drew the portraits of many English and Irish visitors to Italy and made many friends. He sent a few works to the Royal Academy: a portrait group in crayons of Lady Cowper and her sister Miss Gore and An English Traveller, from Florence in 1787; and  Portraits of a Sculptor and his Friend, from Rome in 1791. After a stay in Italy of nearly twelve years, he returned in 1791 to Ireland and settled in Dublin as a portrait painter. he quickly established a reputation and in his house in Clare Street, at the corner of Merrion Square, his studio was soon crowded with patrons. He painted both full and half-lengths in life-size, which were faithful and dignified likenesses, and was particularly successful in portraits of old men, whom he portrayed with much vigour and feeling (an excellent example of the aforementioned is the present portrait, which shows the influence of Caravaggio in his dark setting and rather harsh light that makes the sitter stand out)

After 1804, Hamilton was obliged, on account of his failing health, to discontinue the practice of his profession to a great extent. He devoted himself to the study of chemistry, always a favourite subject with him. In his retirement, although he was soon forgotten by the public, he retained the respect and the attachment of his many friends. He was, says a writer who knew him, “…ardent and steady in his attachments; his manners were of the perfect gentleman; full of information, entertaining an affectionate regard for the talented members of his profession, and always willing to make the most unreserved communication of his knowledge and practice to all who sought it”

Hamilton died in his house in Lower Mount Street, Dublin, on 10 February 1808

Robert Stewart, 1st Marquess of Londonderry (1739-1821), was an Irish peer, politician and landowner. Stewart was born in 1739, son of Alexander Stewart, alderman of Londonderry in 1760, and of Mary Cowan, daughter of John Cowan, alderman of Derry. He was also the nephew of Robert Cowan, the wealthy governor of Bombay. As the second son, he was expected to take up the family’s flourishing linen trading business. His offices traded with numerous Baltic cities including St. Petersburg, Memel and Reval. At the death of his older brother, he moved to Ulster to be closer to his father and look after the family’s properties in Donegal, Londonderry and Down.

He was elected to the Irish House of Commons in 1771 as a member for Down. Between 1775 and 1783 he lived in Bangor with his wife while his father was living in Mount Stewart. He lost his seat in 1783 and was appointed to the Irish Privy Council. In the same year, he inherited his father’s properties in Co. Londonderry and Co. Down and settled at Mount Stewart. In 1789 he was created Baron Londonderry in the Peerage of Ireland. In the following year, he took his son, the future Viscount Castlereagh, out of Cambridge University and had him run for the seat of Co. Down in the Parliament of Dublin, which he won. In 1795 he was made Viscount Castlereagh and in the following year, he was elevated to Earl of Londonderry.

Robert Stewart and his two sons supported the Act of Union (this was the genesis of the Kingdom of Great Britain and Ireland) and fought to have it presented once more after it had been turned down in 1799. As the result of the vote, Londonderry obtained a seat in the House of Lords in London, which he never took up. in 1816 he was made Marquess of Londonderry, again in the Peerage of Ireland. From 1801 until his death he was an Irish representative peer (a representative peer is a member of the Peerage of Scotland or the Peerage of Ireland who has a seat in the British House of Lords) 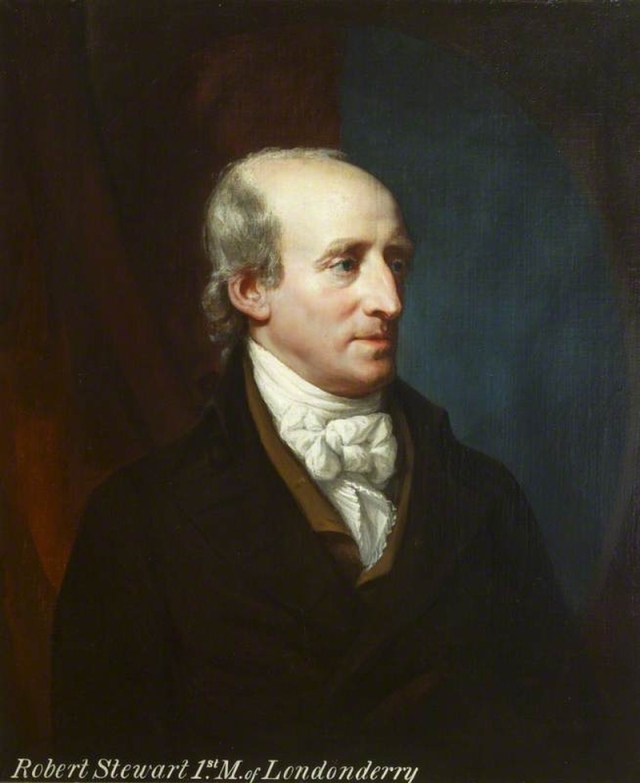